Lutia (What he calls himself, and what he prefers)

Hero (Solo, sometimes with his brother)

Lutia (full name Lutania Alva) is a human male who is 18 years old but cursed for unknown reasons to pause in physical growth since he was 12. He is the son of Arian (from the future) and Shawn. Even though a bearer of abilities passed on from his father's family branch, he chooses to work at a small restaurant at Lakewood Plaza Turbo. He occasionally takes part in hero activities due to being the person that he is. He has a younger brother, Liam.

Lutia has golden hair which is short at front but long behind. His hair at front is separated apart from his face via the use of a headband, and his hair on the hind side is tied up using a hairband of the same color as his headband. He wears his working outfit at all times (except at home), which consists of a blue shirt, a deep-gray colored bow tie, waistcoat, trousers, and a belt to go with his trousers. He wears brown shoes. He has round eyes, slightly pale skin and a triangle-shaped nose. His mouth is smol small. Hair color and skin tone are both passed on from family.

He's a person who people would call a busybody, as he doesn't mind his own business. Being someone who had to raise a child from a young age, Lutia has high endurance and patience. Even though calm, he sometimes act before thinking if the situation is dire. He is an optimistic person who thinks that everyday leads to a better tomorrow (usually). Contrary to that, he seems to have a low self-esteem. He treats others with respect and kindness, no matter who they are (not including Liam, his brother). He speaks in an informal manner, and is constantly relaxed. He's slightly ignorant sometimes. As a young adult, his thought processes seem to be similar to those of a typical grown adult. 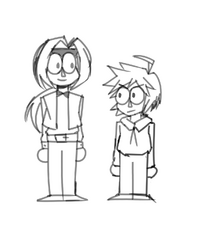 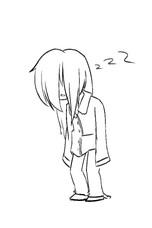 Lutia sleepwalking in his oversized pajamas according to footage from Liam's vlog. Video was captioned with "lol he's sleepwalking again" 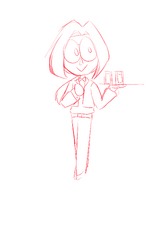 “Would you like to take an order?” ((I’m dying inside, send help 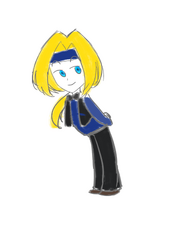 ((also here’s him but in my art style and with bad coloring
Add a photo to this gallery
Retrieved from "https://ok-ko-fanonpedia.fandom.com/wiki/Lutia?oldid=4343"
Community content is available under CC-BY-SA unless otherwise noted.